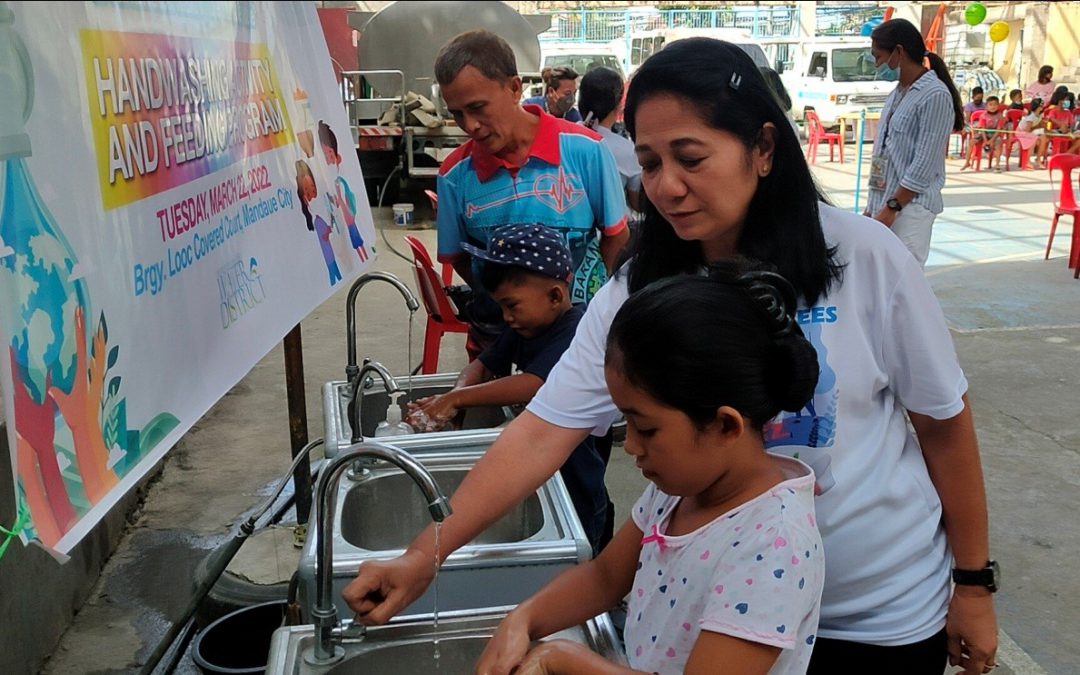 To promote awareness on sanitation and clean environment, the Metropolitan Cebu Water District (MCWD) held a handwashing activity in Barangay Looc, Mandaue City on March 22 as part of the celebration of the International World Water Day.

More than 100 kids participated in the handwashing activity at the barangay’s covered court on March 22 in celebration of World Water Day.

The children were taught the proper way of washing hands with the use of clean water and soap to ensure personal hygiene and cleanliness.

The celebration was also a venue to raise awareness about the importance of water and educate the children to conserve it.

After the handwashing demonstration, the feeding program followed where nutritious food was served to the kids.

MCWD Public Information Division Manager Edna A. Inocando attended the event on behalf of the water district while the barangay was represented by Barangay Councilor Christopher Flores.

Inocando said the theme focuses on groundwater source where water is found underground making it invisible, but the impact is visible to people who have access to it.

Currently, MCWD has 137 wells where water comes from the aquifers that contributed 73 percent of its daily water production. The rest are from surface water sources.

Inocando said that groundwater sources are prone to contamination because there are septic tanks that are bottomless causing the sludge to seep into the aquifer if not properly desludged.

As a means to help prevent this, MCWD put up a state-of-the-art Septage Treatment Plant in Cordova to properly treat and dispose septic tank wastes from residents of the municipality and of Lapu-Lapu City to protect the water sources from getting contaminated.  The project is in compliance with the Clean Water Act of 2004.

MCWD will likewise implement the same program in Mandaue City with the issuance of Ordinance No. 14-2016-1108 otherwise known as “An Ordinance Establishing Proper Sewerage Treatment and Septage Management System in Mandaue City and prescribing penalties thereof.”

In February this year, the Cebu City Government and MCWD signed a Deed of Grant of Usufructuary Rights for the construction of another septage treatment facility plant at the Amcon Site in the North Reclamation Area, Cebu City to increase the septage collection rate of MCWD thereby providing safe and affordable water to the people of Metro Cebu.